I Am Walter's Father: Crates and Stares and Stairs, Oh My! 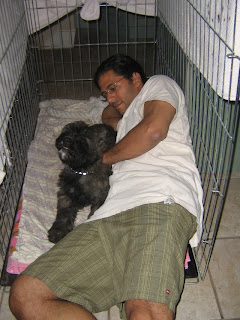 He's become fairly substantial now, and he's quite a suck - has something to do with his parents, I believe. He's feeling the heat - I know what it's like to have long hair! - so he spends a lot of time on the cold tile, under the stairs of the deck (below), or panting furiously (everywhere). The deck stairs are going to 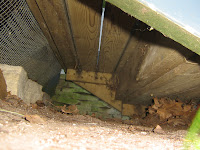 become a problem very soon; he can fit under them - for now. I have visions of taking a skillsaw* to the deck to try to free my dog, who seems to grow an inch every time he takes a nap. "But Dad," he'll wimper, "I got in here just fine!"

He isn't sure about his change of accomodation - not that he spends much time in his crate, between Kath and I working 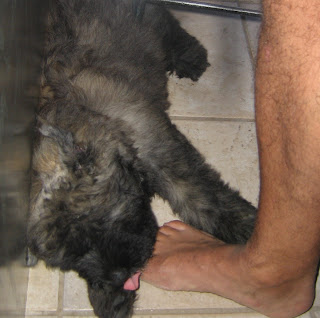 He's been getting tremendous attention on the morning walks to Starbucks, despite Hannah's jealousy. I'm used to the stares that Kath and I get; this is new.