I am Walter's Father, Day One: A drive to remember

Today, we brought home a puppy. This is my first puppy since I was a child, and I'm smitten. His name is Walter. The paternity tests are in: I am Walter's Father.

I couldn't be happier.

Karen, the gentle, wonderful woman who walks Hannah, arrived at ten. The three of us collected Hannah, and for two hours of horrible traffic, drove North, then East, then South. At the end of it all, across from Camp Borden, we found ourselves at a run-down, ramshakle barn. There were goats, rotweillers, and a barbeque graveyard (or the best approximation thereof ever to grace this earth with its horror).

Then we went to the barn next door, where the bouvier puppies were. Google maps are great - but they're not so useful when your working from country directions ("...and after you pass the Giant Tiger if you see Bob's house you've gone too far, but I'll tell you another way from there after the Tim's which our eldest, James, he used to take his future wife - ex now - there on dates before..." Okay, you get the picture.) 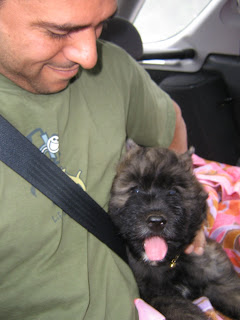 Kath was going to cuddle with Walter on the way home, letting me drive, but she was in a bit of shock, really, and as we all know, people in shock are the best drivers, so Walter and I bundled into the back (after a short span struggling in the front) and off we were, onto wet grey highway.

He cuddled with me most of the way home. Aside from some spectacular farts, there was barely a peep from him; if he has started as he means to go on, he will have an incredibly wonderful temperment. 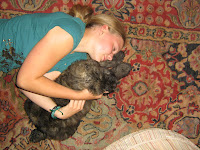 After we got home, the neighbourhood descended upon us. Wendy arrived with Zoe, her big rottie mix, then John and his daughter Katie arrived stating, "We're here to be nosy," with huge smiling faces.

Walter is a hit with the humans. Hannah and Zoe are quite miffed with the puppy, but I'm assured that they will adapt soon enough (Zoe, a.k.a. MOose (yes, the vowels should look like that, you should hear her barking) is Hannah's best friend, and we babysit every Tuesday night).

Perhaps I'll go back and describe our deliberations another time, but it' 02:00, I'm tired, Walter's wiped, Hannah's horrified, my sister's sleeping, and my parent's pyjama's pare pbeing put pon.

When an alliteration is going that well you just run with it, you know?

One more outside with the Sir Stinksalot, Walter the Wondrous, and I'm to bed, to cuddle with Kath. 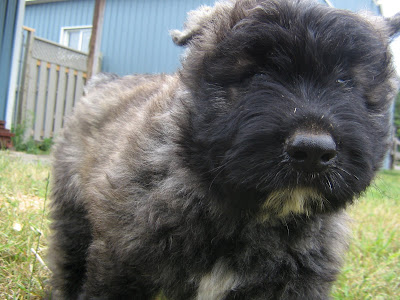 Julian and Son
Posted by Unknown at 4:21 AM