I Am Walter's Father: He went galumphing back. 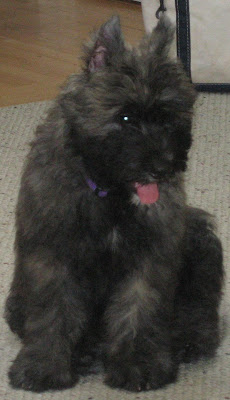 Walter has been growing like crazy, but everyone who has seen the old pictures says, "But he's HUGE!"

He's also insane. I mean starkers. Really. Right now he's blasting from the back of the back yard to the front of the house, carrying a small piece of paper. Nuts.

He's been frolicking with Hannah, who has been frolicking back, and life is great. They spent over an hour rolling around today, entertaining each other. Hannah did get tired eventually (which is when Walter started to entertain himself) but then Kath came home and frolicking began again.

It's cold enough tonight we've put a fire on. Kath is sitting in front of it with a bowl of popcorn. Walter is trying to climb into the bowl. Oh - now she's feeding him a kernel at a time. Bad Kath! Bad! ;)

Did I mention the ice cubes? I have to get some video of him with ice cubes. He chased one around the entire yard, rolling around and growling at it like it was vermine in need of execution.

...and now he's chasing Sammy, who leapt onto the counter to avoid him. Never a dull moment!

Right, enough for today. From Walter, Hannah, Kath and I: