I Am Walter's Father: Father's Day and the Inglis Picnic

My mother's maiden name is Inglis - pronounced "ing-GLS" not "ing-GLIS". It's an old family, from the Campbellville area, and since 1952, the family has had a picnic each year. It used to be later in the summer, but it's been on Father's day for some time. This year was the lowest turnout ever - just 18 people - and from the demographics* this year might have been the last picnic. We're going to try some things to re-engage the "youth" (I find it hilarious to be considered a "youth" at 37 years of age). The gravestone is my great grandparents - my mother's father's parents.

In any case, we had a great time - good potluck lunch, lots of laughter, sack races (I won), balloon toss (mom and I came second), shoe toss (I won that too), and more. It was a good day.

This is the schoolhouse where we were this year:

Walter was a real hit with the ladies.

He wanted to join us for lunch... 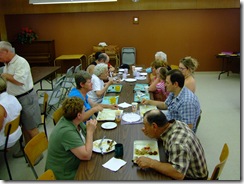 ...but he was relegated to the doorway.