Drive first because I need to think about how I describe Meeting The Father. :)

Although I can't find it on any maps, there appears to be a state called "timeless" between home and anywhere else. I drove through it yesterday. No, obviously, I don't know how long it took to cross! I know the total travel time from Toronto to Poughkeepsie, NY was nine hours. I couldn't tell you what happened during any of the actual minutes, though.

Let's start with the house. It's big, on a large grass-and-trees lot. Like Kath's house, it is a comforting balance of cosy closeness and bright open space. It is sparse, but by no means empty.

I see where Kath gets it. No, not any particular 'it' - all of it. Bill has a gruff voice, and a definite walk. He cooks the way she does, and sits quietly and comfortably for hours, doing his own thing.
___

I never published this blog post, oh so many years ago. I wan't sure how to end it. Now, with half a decade of experience, I am sure.

...and since I don't want to end this post with 'poo' I'll say, happy holidays, merry Christmas, and general family delight!
Posted by Unknown at 10:26 PM No comments:

It's been five years since my last post on this blog. A lot has happened, of course. I used tumblr for a while (personal.juliansammy.com) but haven't posted there for a long time either.

This picture is from +Hugo Bohórquez birthday a few weeks ago. It was a lovely affair in Guelph, with many family and friends there. +Joy Sammy is in the background, caught in a distant kiss. :)

This one is from a Christmas giftstravaganza this morning, in Poughkeepsie. We had a lovely time. 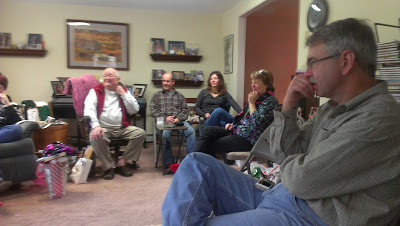 And this is a panorama of mom's place in Mulmur. +Kathy Sammy has some spectacular views, especially in the fall.

Until next time.
Posted by Unknown at 7:24 PM No comments: